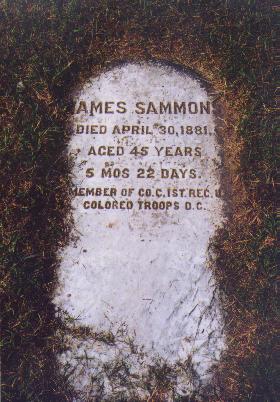 (Occasionally noted in the pension records as having been in Company K of the Regiment, but most records indicate Company C.  Also, John Hughes, who was one of the affiants in James' records, and who was actually in Company K, stated in a sworn statement that James was in the same Regiment as he, "but not in same Company.")

(Many of the later pension documents are based on claims of James' youngest daughter, Priscilla, who was a minor at the time of his death).

Priscilla E. Sammons married Zeiba Berry on 08 May 1901 in Gouldtown, Cumberland Co, NJ.
He was b. ca. 1849 according to an affidavit by Priscilla (even though Zeiba's age is given as 30 on the marriage certificate--indicating birth ca. 1871--Priscilla gives indication this was a deceptive statement, and that his age was "about 52" at the time).  He was the son of Elisha Berry and Eliza Taylor.

He was married twice prior to Priscilla, first to a Mary Beeby, and second to an Annie Gould, and was not divorced from either one at the time he married Priscilla, and kept this secret from Priscilla.  When Priscilla found out the truth (from Annie), she left him (on 23 Dec 1904) and subsequently went to a lawyer who "got me a separation."  In an affidavit in the file, Priscilla is also quoted as saying, "he [the lawyer] told me to resume my maiden name, and told me that I could get married again if I cared to.  But I will never marry again for I was thoroughly disgusted with marriage after I learned about my former husband.  Priscilla and Zeiba had one son, Ralford Berry, who was stillborn on 17 Jul 1902 in Bridgeton, Cumberland Co, NJ.
(Fortunately, Priscilla seems to have changed her views on marriage, as she was known as "Mrs. Priscilla Alexander" in Apr 1934).

Priscilla resided at Merchantville, Burlington Co, NJ as of Apr 1934.

As for James & Lizzie's family Bible, Priscilla states in an affidavit dated 27 Nov 1917:  "The record in that Bible shows that I was born on August 20, 1879, and that is what my mother always told me.  The Bible is now in possession of Mrs. ____ Hackett, on Ludlow St., between 37th and 38th Sts.  [Philadelphia]  Her husband's mother was a distant relative of my mother.  After the death of my mother, Mrs. Hackett took the Bible for it also contains the record of births of some members of her family."

Another affidavit, dated 17 Dec 1917, states:  "...I made a deposition in the case on November 27, 1917.  Since which time I have obtained the Bible containing the record of my date of birth.  This Bible has been in possession of Sallie Hackett, she is a distant relative of my mother. After the death of my mother, this Bible fell into the hands of Aunt Sallie Hackett, not the Sallie Hackett that has had the Bible but her husband's Aunt."


Among the affiants / witnesses for [James] and [Elizabeth] and Priscilla:

On the African American Civil War Memorial in Washington DC, James' name is displayed on Plaque A-3.


1.  Does anyone know the death date of Priscilla Sammons Berry Alexander?  According to the file, she was last shown to be living as of Apr 1934.

2.  Does anyone know of any descendants of Robert Sammons, the son of James Sammons who moved to Indianapolis, IN?

3.  Does anyone know who the parents of James were?

4.  Does anyone know who the parents of Lizzie's 2nd husband Joseph Dean were?

I have been going over James Sammons Records and have some thoughts about who some of them could be.

#4 I didn't know who Sallie J Sammons parents were!

#5 William Sammons b 20 July 1869 married Clara Carney, then Florence Johnson, some of their children were Mary married Robert Corney, son of Walter H and Eleanor Durham Corney. William (Tippy Bill) Sammons married Francis Coward, they had one Dau Anna Sammons, Elizabeth Martha married Jonathan Pierce. They all lived over here in NJ. In at least one of the NJ census they were listed as Simmons.

#10 Pricilla Sammons, I have her in my notes as sister of William Sammons, no other information in notes. But in Fordville Cemetery ledger there is a Pricilla Alexander no dates or any other information except #3 by her name. Not sure what this means.

Now this is just my thoughts at this point, but I think the Luvinia/Lavenia Miller listed as one of the affiants is Lavinia Cott married to William Dean, son of Jesse and Hester Carney Dean. After the death of William, Lavinia married David Miller. William and Lavinia had five children, Josiah, Annie, Ellen, Mary W, Sarah Dean, three of the children are mentioned in the Jesse Dean Orphans Court records, Josiah, Ellen/Ella, Mary Dean. Ella married Isaac Sockume and Mary married Joseph Carney. I could never locate Josiah after 1870 and didn't know what happened to him. I think the Joseph Dean mentioned in the Sammons records is probably Josiah Dean.

Then concerning #3 James "Jemmins" T Sammons b Sep 17, 1865. I have some handwritten records that were taken out of Sexton Book I and II, Broad Street Presbyterian Church, Bridgeton NJ. The original book was located at the Greenwich Historical Society in Greenwich, NJ.

There are a lot of Pierce's, Gould's, Murray's and a few Cuffs listed also.

In the Evergreen Cemetery Book 1905 ( now known as the Gouldtown Cemetery) Sammons listed: