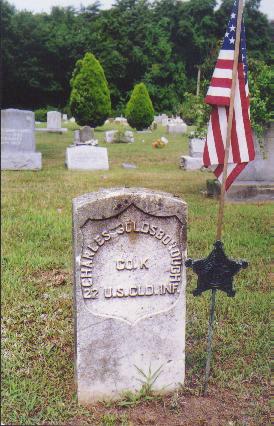 Date of death:  11 Sep 1916 at Sheppard's Mills, Cumberland Co, NJ
Note: Charles' death certificate, below, incorrectly identifies his father as "John" instead of the correct "Robert."

Her date of birth:  ca. 1855 (per her age given as 40 on her marriage certificate--included in the pension records--when she married her 2nd husband, Charles Goldsborough) near Old Grove, Caroline Co, MD.

Charles' father, Robert Goldsborough, was also a Civil War veteran (and was stated as having received a pension as well), and also Charles had three brothers who were also Civil War veterans:  Robert, William and Richard "Dick."  Also possibly a brother Sam.  The brother Robert was killed at the Battle of Chaffin's Farm, VA (aka the Battle of Chapin's Farm).  He also had a younger brother Edward and a younger sister Martha.

Charles' father was incorrectly named as John Goldsborough on Charles' death certificate (copy included in pension records).  It does not state who the informant was.  His mother's name was given as "not known."

Unfortunately for Charles, it appears that an error was made at the time his discharge papers were written (an erasure & re-writing of the number of years he served--one), and this raised the suspicion of document tampering (although it was eventually noted that the field in question had no bearing on his eligibility), but caused Charles to have to go through an incredible process of repeated affidavits, an official "Special Examination," along with witness statements and affidavits, before his pension request was eventually approved.  (The fact that his place of birth at time of discharge had been given as Camden, Camden Co, NJ, and that all his later affidavits during the pension application period gave his birthplace in Cumberland Co, NJ, had also added to the suspicion).

Charles had "no children, never had any," per an affidavit dated 22 Apr 1905.  However, per a statement in the "Special Examination" documents, the examiner stated the following of Charles:    "The man seems entirely rational but his memory for anything that happened more than a few years ago seems very uncertain.  For instance, when he met me at the hotel in Bridgeton he told me that his daughter was a chambermaid there, which is true; but when I asked him at the end of his statement whether he had any children he said, no."


Among the affiants / witnesses for Charles and Hattie:

Other notable names (to our families) mentioned in affidavits and/or depositions:


OTHER ITEMS PERTAINING TO CHARLES GOLDSBOROUGH, NOT FROM THE PENSION RECORDS:

On the African American Civil War Memorial in Washington DC, Charles' name is displayed on Plaque B-38.

1.  Does anyone know of what connection Charles' father, Robert Goldsborough, may have had with any of our other Delaware families?  (I have ordered Robert's pension records, so these may shed some light on this, once received).


To view some of the other Civil War pension extractions, as well as an explanatory note, please see the following page of the Mitsawokett site: