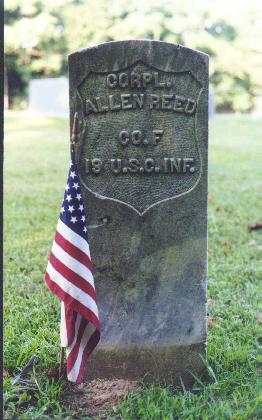 Enlisted (under the name of Allen Murray)  (differing dates given in the pension records):

Explanation for name-change given in an affidavit signed by Allen in Sep of 1905:

Among the affiants / witnesses for Allen Murray / Reed:  Caleb Boggs


OTHER ITEMS PERTAINING TO ALLEN MURRAY/REED NOT FROM THE PENSION RECORDS:

On the African American Civil War Memorial in Washington DC, Allen's name is displayed on Plaque B-36.

There were no widow's pension documents among the pension records, therefore it can be assumed that Rebecca died prior to Allen.

Middle names / initials (or full first names) of the children are as follows:

One of the sons seems to have had the nickname "Dasey" Reed--perhaps Walter.

It has been said by some of Allen's descendants that his full name was JOHN Allen Reed, but there is nothing in the pension records to give any indication of his first name being anything other than ALLEN (especially given the circumstances of all the extra explanation needed to clarify his last name being Reed rather than Murray).  His death certificate also reads only "Allen Reed."

1.  Does anyone have the death date of Allen's wife, Rebecca?  It had been given by Betty & Ray Terry (per the family Bible belonging to Effilinda "Effie" Reed Carney) as 13 Feb 1929, but this is ALLEN'S death date, per the pension records (and per his death certificate).  It seems that Allen's death date was mistakenly written into the Bible's as Rebecca's.  (Of course, there is the possibility that they both died on the same date, but this seems unlikely since only the ONE death date--for Rebecca--was written into the Bible.  There was no entry for Allen.  If both had died on the same day, it would be expected that the Bible inscriber would have entered them both).  Also, Allen's death certificate listed him as a widower, so Rebecca must have died prior to him.