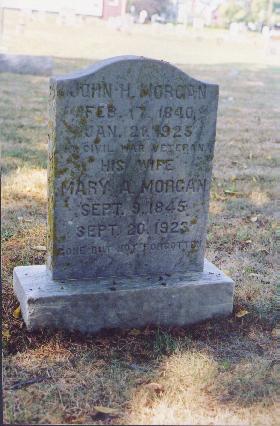 A letter from John Morgan to the Commissioner of Pensions office in Washington, dated 24 Feb 1919, included the following:

"Having had a fire and my home being totally destroyed I have been moving from place to place and in so doing my Pension Voucher has either been misplaced or destroyed and I am writing to request you to issue another for me."

"He laid his Pension Certificate on the table with other papers, one of his boys made a fire since which time he has never seen the certificate."

[It is curious to wonder whether these statements are both referring to the same incident. The first one describes the home being totally destroyed, but the latter one makes it almost seem the certificate was used for kindling! It could just be the wording however, and indeed be referring to the same incident. Another curious item in the latter statement is the mention of "one of his boys," but according to the documentation in the pension records, John only ever had ONE son--George] --- JCC

OTHER ITEMS PERTAINING TO JOHN H. MORGAN,, NOT FROM THE PENSION RECORDS:

On the African American Civil War Memorial in Washington DC,
John's name is displayed on Plaque A-3.

To view some of the other Civil War pension extractions, as well as an Explanatory note, please see the following page of the Mitsawokett site: