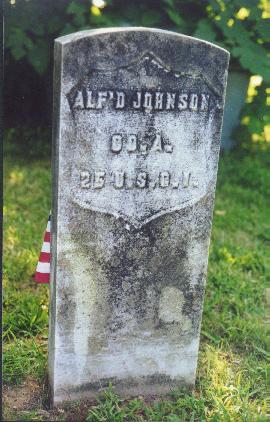 One affidavit identified his middle initial as "A," not "N," but the majority of records list "N."

Date of birth:  15 Mar 1846 at Sussex Co, DE (per several records)(one record states he was born in New Jersey)

(One document listing her date of death was a note to the Pension office by "Sina Mosley, sister, Dover, Del.")

One document signed by Alfred Johnson with his mark, dated 04 Jun 1898, gave his wife's maiden name as Rebecca "Ridaway" and stated that they had been married for "28 years" and that he had "no children nor never had any."

One document dated 1908 (after Alfred's death) stated "No children," and also stated that neither Rebecca nor Alfred had been formerly married, and that they had "cohab for 40 yrs" (and someone wrote "1870" next to this). Another document (dated 22 Aug 1908) states "She was married under the name Rebecca Ridgway to said Alfred Johnson about forty years ago (she has no marriage certificate and there is no written record that she knows of, but the marriage can be proven by persons who were present at and saw the ceremony) by Rev. James M. Hope about two miles west of Dover, Delaware."


OTHER ITEMS PERTAINING TO ALFRED N. JOHNSON NOT FROM THE PENSION RECORDS:

On the African American Civil War Memorial in Washington DC,Alfred's name is displayed on Plaque B-41.

1.  Does anyone know who Alfred's parents were?

2.  Regarding his wife, Rebecca Ridgway:  It would appear--based on her having a sister named Sina Ridgway Mosley, as well as the presence of the names Tilghman Ridgway, Sylvester Ridgway and George W. Mosley (Sina's husband) among the affiants--that Alfred's wife, Rebecca, was the Rebecca who was a daughter of Tilghman Ridgway, Sr. and Sina Mosley Ridgway. However, according to info posted to this list by Betty & Ray Terry on 22 May 2000, Tilghman's daughter Rebecca was married to #1 _______ Sammons and #2 Jerry Clark.  When I recently wrote to Betty & Ray for their notes/sources, they provided the following:


Not sure how GEORGE Clark became JERRY Clark....

Also, question for Don:
How could Rebecca be having children with Isaac Sammons (John b. 1873, Moses b. 1873 & William b. 1875) at the same time as having children with George Clark (Alfonso b. 1873 and Estella b. 1875)??  What evidence is there that shows that the Rebecca who married Isaac Sammons and (especially) George Clark is the same as the Rebecca who was the daughter of Tilghman?

Is there an error here, and thus these are the one-and-the-same Rebecca Ridgway?  (If so, something is wrong, because all records of Rebecca's death list her name as Rebecca JOHNSON, not Sammons or Clark).  Or are these two different Rebeccas?  (If so, data between them is getting mixed up.  The Rebecca who died on 01 Feb 1919 was Rebecca Ridgway JOHNSON).

Please let me know if anyone has any questions.   John C. Carter   spiff@atlantic.net

I have the following for Alfred Johnson:

Robert Johnson and wife Mary <maiden name unknown> are both listed as age 62. In their home for this census are:

Although this does not answer the question of who Alfred Johnson's parents are, it perhaps reflects the family line he descends from.